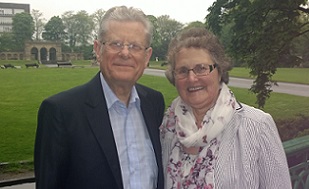 Peter Hamlett was just seven when he decided to follow Jesus. He acknowledges however that it was many years before he grew up spiritually even though he was given leadership responsibilities at an early age within The Salvation Army, into which Peter was born and brought up.

Beryl had led the way as first she and then Peter encountered the life changing reality of Holy Spirit power. Eventually it became clear that God planned something new for them. His leading was into The King’s Church in which they have become increasingly active, Peter now being a member of the Senior Leadership Team.

Peter and Beryl have been privileged to minister throughout the UK and abroad but they realise that their principal calling is to Halifax. They are now retired. Their daughter lives with her husband and two children only a mile or so away from them which explains why it is not just Church which keeps the Hamletts busy!