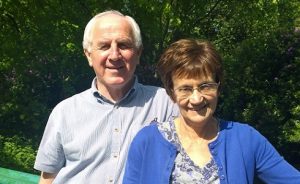 Paul and Val McMahon are part of the senior leadership here at The King’s Church. Paul was a professional musician before surrendering his life to Christ in the early 70’s. Val came to the Lord through Billy Graham at one of his crusades.

They were married in 1975 and have three children and four grandchildren. They lived in Bradford, being part of The Church House Fellowship (now LIFE Church) for many years before being sent out to join the church in Halifax in 1984. Paul has fulfilled various leadership roles before becoming the senior leader in 1994.

Both have traveled extensively in sharing the message of the Kingdom. Their passion is to see the Church fulfill its God-given vision and to see the people reach their full potential as fully equipped and available ministers of the life of the Kingdom wherever they are planted.