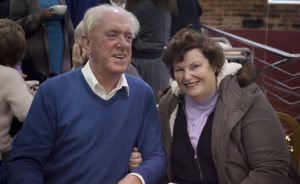 Paul and Eve are founder members of the church. They have 2 children and 5 grandchildren. In the late 1970’s a small group of Christians began meeting in their home. Many things happened over the next 5 years and by 1980 Halifax Christian Fellowship was formed, now known as the Kings Church Halifax. Paul was made an elder in 1996.

They have been appointed as Divisional Directors for IAHR looking after many nations in Europe including the United Kingdom. They have run Healing Room training courses in Albania, Croatia, Czech Republic, Latvia, Macedonia, Moldova, Siberia and Spain. Paul has spoken at conferences in Albania, Finland, France, Latvia, Romania, Ukraine and England.